The number of medical applications of electrochemistry has grown in recent years due to the increased applications of electrochemical concepts to various systems of the organism. This includes electrochemically controlled hemosorption detoxification, where the removal of toxicants is controlled by changing the potential of the hemosorbent. It is important to avoid Faradaic processes in the course of hemosorption, which can lead to the addition of electrochemically modified toxicants to blood. The probability of their occurrence should depend on the open-circuit potential of the activated carbon. In order to elucidate the identification of Faradaic reactions, a model system was investigated. The adsorption of copper ions, tert-butanol and acetone on samples of electrochemically modified AG-3 activated carbon hemosorbent with various open-circuit potentials was used as a model of the detoxification processes. The effective number of electrons transferred in the elementary act of adsorption was shown to be a non-zero quantity for all three cases, which corroborates an electrochemical mechanism of hemosorption. For the cupric ions, ranges of open-circuit potentials were identified corresponding to different mechanisms of adsorption and Faradaic processes.

Articles are published under the terms and conditions of the
Creative Commons Attribution license 4.0 International. 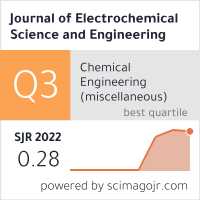 Published by the International Association of Physical Chemists under the terms of the Creative Commons CC-BY 4.0 license.